7 deadly (costly) traps employers can step into and how to avoid them. 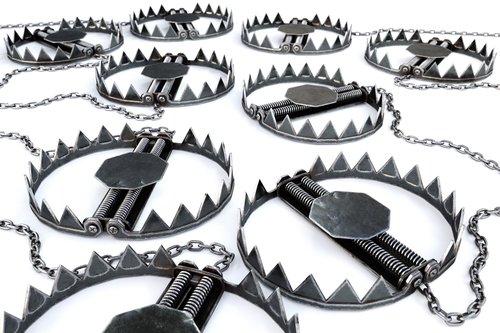 The other day, I was at my local electrical retailer and we got talking about the challenges small businesses face and he mentioned staff employment related issues. I was asked, “Graeme, what are the most common traps that you see employers fall into?” A good question, and I elaborate here, on the answers I gave.

In my experience, (not only as a small business owner but also as an employment lawyer), the seven most common traps, any one of which may prove costly if an employee makes an Application (for compensation) to Fair Work Australia, are:

In general, an employer must not terminate an employee’s employment unless notice in writing has been given with the period of the notice being no less than a minimum period stipulated in The National Employment Standards.

If the termination is by way of redundancy, then subject to certain exclusions, a minimum redundancy pay period applies.

Failing to give adequate Notice, can be a significant trap.

We all know business conditions can be challenging at times. At these times, redundancies can be common, but if not carried out in accordance with the law, the consequences can be significant to the employer.

Failure of an employer to comply with the obligations contained in a Modern Award will place the employer at risk of an unfair dismissal claim.

Likewise, failure of the circumstances surrounding the purported redundancy to come within the proper definition of redundancy, exposes the employer to a claim for unjust dismissal.

A dismissal will only be a genuine redundancy, if the job of the employee is no longer required to be performed by anyone because of changes in the operation or requirements of the employer and the employer has complied with any obligations in an Award in respect to consultation about redundancy.

A dismissal is not within genuine redundancy if it would have been reasonable in all circumstances for the worker to be redeployed within the employer’s enterprise or an associated entity of the employer.

The Small Business Fair Dismissal Code applies to small business employers (essentially a business with fewer than 15 employees) and is essentially a checklist to determine compliance.

The onus of establishing compliance rests with the employer. The Code and Checklist can be downloaded from www.fairwork.gov.au

The retailer I spoke to, was unaware of this Code. Failure to comply with this Code can also be deadly.

In cases of dismissal, failure to ensure that the employee gets a fair hearing, exposes the employer to a potential finding that the dismissal was harsh, unjust, or unreasonable.

Procedural fairness usually requires a clear statement of what is alleged; an indication that the potential outcome may be dismissal, so that the employee appreciates the seriousness of the matter; the opportunity for the employee to take advice and/or be represented and an open mind by the decision maker (employer) to all the circumstances of the matter.

Don’t be tempted to rush the process and be exposed to a claim for unfair dismissal.

Dismissals due to poor performance are amongst the most difficult, as they are more likely to involve subjective issues such as relationships with other staff and the like.

An incorrectly managed poor performance issue exposes the employer to risk of a claim for harsh, unjust, or unreasonable dismissal.

There are many considerations before an employer can rely upon poor performance as a basis for dismissal.

This can be a common trap because the process of managing poor performance can be frustrating, and any shortcuts taken, can be costly.

It is essential that employers retain all documentation which substantiates matters relevant to the ultimate dismissal of the employee.

In a case of summary (instant) dismissal for serious misconduct, any documentation or information pertaining to the reason for such summary dismissal should be retained.

In case of poor performance dismissals, it is prudent to document the meetings with the employee and confirm the meeting and outcome in writing.

The more effort that is made in drafting the contract of employment, the less likelihood there is for dispute as to what the terms and conditions of employment were.

If you feel that you have fallen into a trap, or want to avoid a trap altogether, contact an employment lawyer here at LawCall